Rivkie's Tips for a Healthy Lifestyle

Rivkie Blau is a Certified Integrative Nutrition Health Coach, Reiki Practitioner and Consultant for a Toxic Free Skin Care line. Her daily health tips can be found at: https://www.instagram.com/renewbyrivkie/

The first night of Passover was very traditional and fun.  Lots of Jewish food with friends and a very late and large dinner. I decided to change things up for 2nd night seder with lighter, healthier and healing foods!

Yes, this was the whole seder dinner and I have so much to share about this.

1. Eating at Night: Many studies show that our digestive system slows at night so it’s healthier not to eat large meals at night.   Exposure to sunlight promotes easier digestion. When the sun goes down, there is less light stimulating the optic nerve, and digestion slows down. This declaration does not sit well with people who take pleasure in eating late at night. People will continue to look for excuses to indulge in their addictions, but ignorance is why numerous people encounter disease.

2. Healthier Carbs: If you’re going to eat Matza or a traditional holiday food that has you eating carbs late, try going for a healthier type of carb, preferably whole grains, non-wheat such as: quinoa, millet, brown rice, oats, kasha, teff, amaranth, kamut, spelt, barley, farro, even some whole grain breads like ezekiel aren’t bad.  When having spelt, I prefer whole spelt over white spelt, but this is all I found last minute. And keep the carbs portion small if it’s late.

3. Fermented Foods: Ahh, fermented foods and drinks, where do I start?  There are enormous health benefits in eating fermented veggies such as Kimchi, and any other fermented stuff.  Many studies believe that you should have something that is fermented with every meal, or at least once a day, and even a very small amount is sufficient. Fermented foods and drinks (like Kombucha) will introduce beneficial bacteria into your digestive system much like probiotics and will help slow or reverse some diseases, improve bowel health, aid digestion, and improve immunity. Also helps you absorb more of the nutrients in the foods you eat.

a) Pickled veggies – I love making this, it’s super easy with filtered water, apple cider vinegar, sea salt and some pickling spice.  You can use any veggies you want, I used cucumbers which quickly turn into pickles, different color organic carrots and radishes from farmers market, scallions, daikon radish (amazing health benefits, more on that below), broccoli, cauliflower, etc.  It’s a great snack, lasts quite a while in the fridge and is cleansing and healthy.  Small amounts of these create variety in meals and bring balance, aid digestion, and increase vitality. The macrobiotic diet believes that sauerkraut, pressed vegetables, and other pickles should all be used on a daily basis. Remember: A small amount goes a long way. 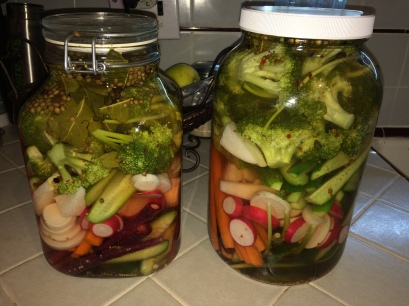 b) Two kinds of Kimchi: One I got from whole foods and one I got from the farmers market which has tumeric and all sorts of healthy additions to it.  Both amazing.  If you want to see the pictures of any of the jars, let me know.

c) Daikon radish: White veggies have a cleansing effect – they reduce and eliminate fat out of your body, much  like the way dish soap takes away the grease on a pot.  Other benefits of daikon- its ability to prevent certain types of cancer, boosts the immune system, reduces inflammation, improves digestion, detoxifies the body, strengthens bones, aids respiratory health, and stimulates weight loss.  I buy daikon radish and eat it raw or I buy it fermented. A place I love to get it fermented (like you see on the plate in the image above) is from “Daves Korean” in the farmers market – my absolute favorite place to get cleansing fermented veggies and broth…more on everything I buy from there in another post.

4. Kale: I substituted the traditional lettuce on the seder plate for kale because that’s what I had in the house. Kale is great for aiding in digestion and elimination with its great fiber content. It’s also filled with so many nutrients, vitamins, folate and magnesium etc.  But…when kale is “massaged” before eating, it tastes much better and its nutrients are absorbed into the body a lot easier..more on that in a different post.

5. For the traditional egg on the seder plate – I used a brown organic egg.  An egg is considered organic if the chicken was only fed organic food, which means it will not have accumulated high levels of pesticides from the grains (mostly GM corn) fed to typical chickens.  Additionally, testing has confirmed that true free-range eggs are far more nutritious than commercially raised eggs.  I have a great way to cook it so that its the perfect bright color, soft, easy to peel, etc.  Learned this trick from my brothers (aren’t guys often better at cooking)?

6. For charoset I used a spoon of organic peanut butter.  Peanut butter should only be eaten organic. Unlike nuts (which have hard shells) peanuts have soft, porous shells, which contaminants (fertilizers, pesticides and molds) can permeate and reach the peanut itself. Plus, peanut butter does not need to have sugar in it like many brands do.  I buy the plain one from trader joe with just sea salt and it’s delicious.

7. Cold pressed fruit and vegetable juice for a cleanse.  Really you should not be buying cold pressed juices in plastic containers (I learned that after i bought mine) but anyways, try everyday or at least every other day to have a vegetable juice.  Did you know that only 50-60 percent of the nutrients in the food that we eat gets absorbed in our organs and cells and the rest is eliminated?  However, if you drink a juice, 80-90 % of the nutrients in it gets absorbed in your body and gets absorbed quickly so you should immediately feel energized.  It’s also a great cleanse.  Yes, it doesn’t have the fiber that you get by blending veggies or chewing it, but one juice a day is great for you and important!

One thought on “A different type of Seder Plate”